Nassau participates in the USTA Middle States Spring league. Men’s USTA teams range from 3.0-5.0 levels. Teams begin to form as early as December for the upcoming Spring. In addition, Nassau offers USTA mixed doubles teams in the winter that begin to form in late September. Team schedules will vary by club location. Below is currently when the teams play.

If you are interested in playing on a USTA team, please Email Us your name, level and phone number.

Founded in 1881, the United States Tennis Association (USTA) is the national governing body for the sport of tennis in the United States. In addition to owning and operating the US Open, Olympus US Open Series and selecting the members of the Davis Cup, Fed Cup and Olympic teams, the USTA administers a variety of programs nationwide for players of all ages and ability levels. 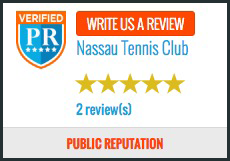